SIFT (Scale Invariant Feature Transform) is a feature detection algorithm in computer vision to detect and describe local features in images. It was created by David Lowe from the University British Columbia in 1999. David Lowe presents the SIFT algorithm in his original paper titled Distinctive Image Features from Scale-Invariant Keypoints.

Image features extracted by SIFT are reasonably invariant to various changes such as their llumination image noise, rotation, scaling, and small changes in viewpoint.

There are four main stages involved in SIFT algorithm :

We will now examine these stages in detail.

Before going into this, we will visit the idea of scale space theory and then, see how it has been used in SIFT.

Scale-space theory is a framework for multiscale image representation, which has been developed by the computer vision community with complementary motivations from physics and biologic vision. The idea is to handle the multiscale nature of real-world objects, which implies that objects may be perceived in different ways depending on the scale of observation.

The first stage is to identify locations and scales that can be repeatably assigned under differing views of the same object. Detecting locations that are invariant to scale change of the image can be accomplished by searching for stable features across all possible scales, using a continuous function of scale known as scale space.

The scale space is defined by the function:

So, we first take the original image and blur it using a Gaussian convolution. What follows is a sequence of further convolutions with increasing standard deviation(σ). Images of same size (with different blur levels) are called an Octave. Then, we downsize the original image by a factor of 2. This starts another row of convolutions. We repeat this process until the pictures are too small to proceed. 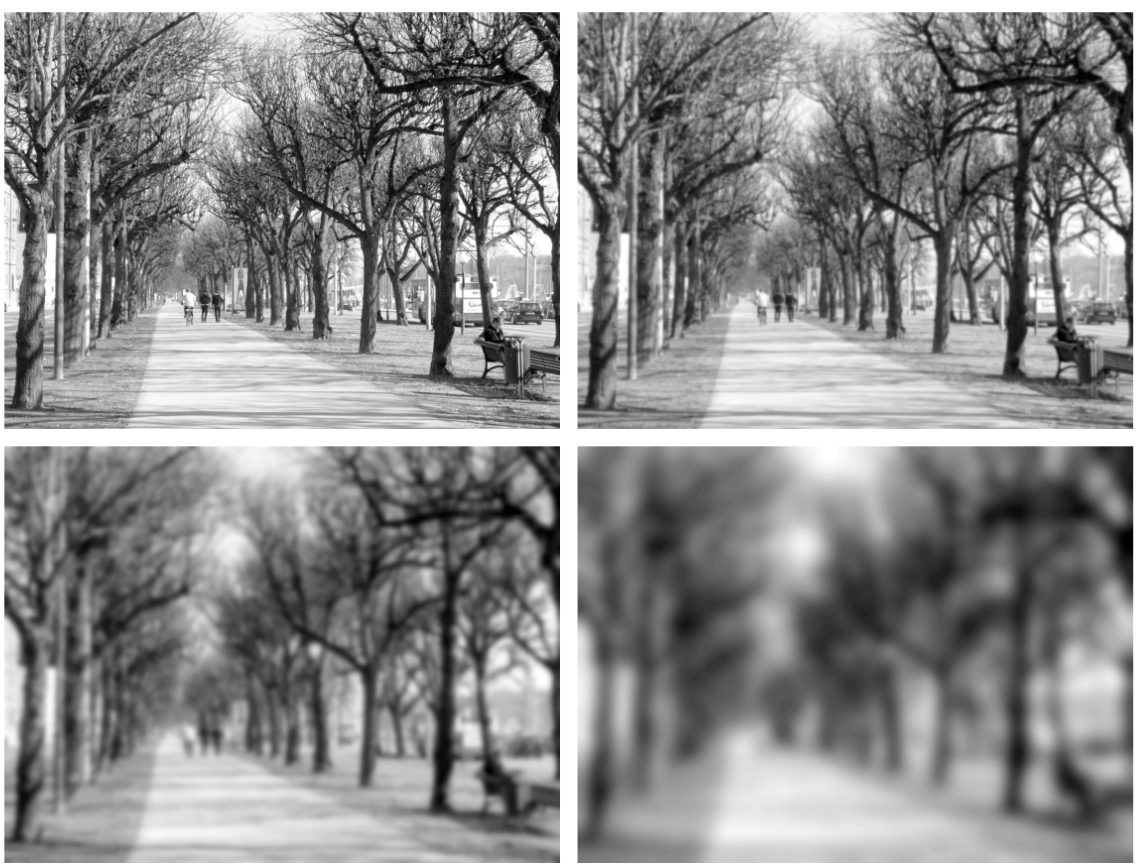 Now we have constructed a scale space. We do this to handle the multiscale nature of real-world objects. 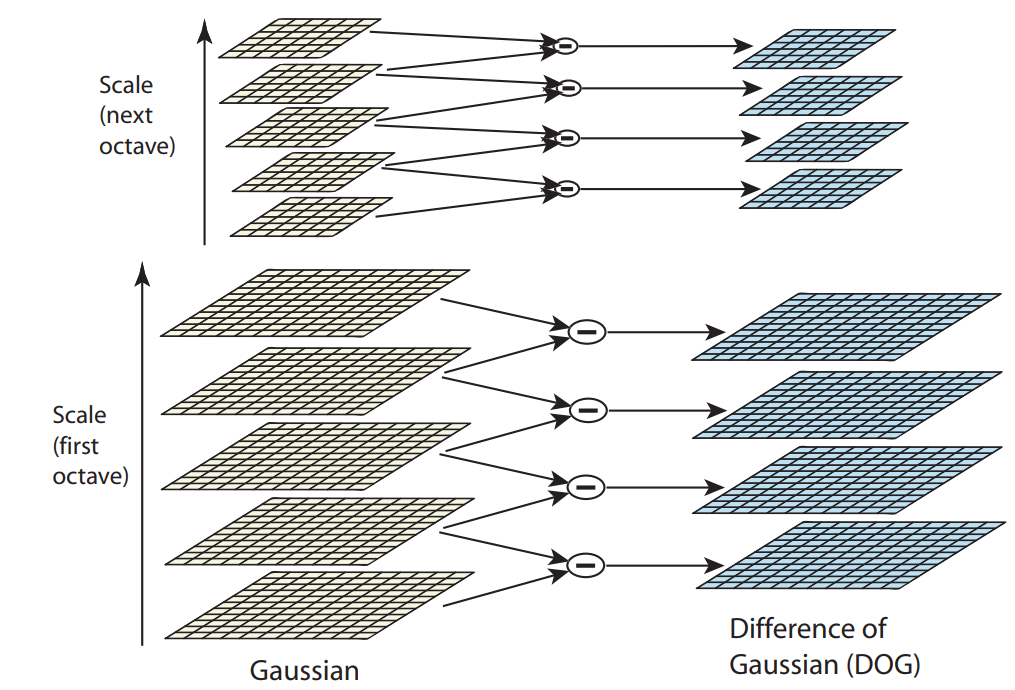 Figure 2 : For each octave of scale space, the initial image is repeatedly convolved with Gaussians to produce the set of scale space images shown on the left. Adjacent Gaussian images are subtracted to produce the difference-of-Gaussian images on the right. After each octave, the Gaussian image is down-sampled by a factor of 2, and the process repeated. Image from: Lowe, David G. "Distinctive image features from scale-invariant keypoints." International journal of computer vision 60.2 (2004): 91-110.

This is done for all octaves. The resulting images are an approximation of scale invariant laplacian of gaussian (which produces stable image keypoints).

Now that we have found potential keypoints, we have to refine it further for more accurate results.

The first step is to locate the maxima and minima of Difference of Gaussian(DoG) images. Each pixel in the DoG images is compared to its 8 neighbours at the same scale, plus the 9 corresponding neighbours at neighbouring scales. If the pixel is a local maximum or minimum, it is selected as a candidate keypoint. 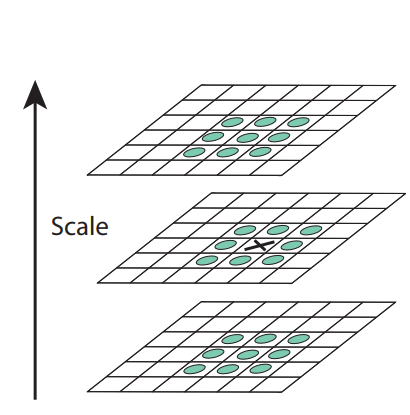 Figure 3 : Maxima and minima of the difference-of-Gaussian images are detected by comparing a pixel (marked with X) to its 26 neighbours in 3 × 3 regions at the current and adjacent scales (marked with circles). Image from: Lowe, David G. "Distinctive image features from scale-invariant keypoints." International journal of computer vision 60.2 (2004): 91-110.

Once a keypoint candidate has been found by comparing a pixel to its neighbors, the next step is to refine the location of these feature points to sub-pixel accuracy whilst simultaneously removing any poor features.

The sub-pixel localization proceeds by fitting a 3D quadratic function to the local sample points to determine the interpolated location of the maximum. This approach uses the Taylor expansion (up to the quadratic terms) of the scale-space function, D(x, y, σ), shifted so that the origin is at the sample point:

The location of the extremum, \(x̂\) , is determined by taking the derivative of this function with respect to x and setting it to zero, giving:

On solving, we’ll get subpixel key point locations. Now we need to remove keypoints which have low contrast or lie along the edge as they are not useful to us.

The function value at the extremum, D(x̂), is useful for rejecting unstable extrema with low contrast. This can be obtained by substituting extremum x̂ into the Taylor Expansion (upto quadratic terms) as given above, giving: $$ D(\hat{x} ) = D + \frac{1}{2} \frac{\partial D^T}{\partial x}\hat{x} $$

This is achieved by using a 2x2 Hessian matrix (H) to compute the principal curvature. A poorly defined peak in the difference-of-Gaussian function will have a large principal curvature across the edge but a small one in the perpendicular direction.

So from the calculation from hessian matrix we reject the flats and edges and keep the corner keypoints.

The magnitude and orientation is calculated for all pixels around the keypoint. Then, a histogram with 36 bins covering 360 degrees is created.

\(m(x,y)\) is magnitude and \(\theta(x,y)\) is the orientation of the pixel at x,y location. Each sample added to the histogram is weighted by its gradient magnitude and by a Gaussian-weighted circular window with a σ that is 1.5 times that of the scale of the keypoint.

Each sample added to the histogram is weighted by its gradient magnitude and by a Gaussian-weighted circular window with a σ that is 1.5 times that of the scale of the keypoint. 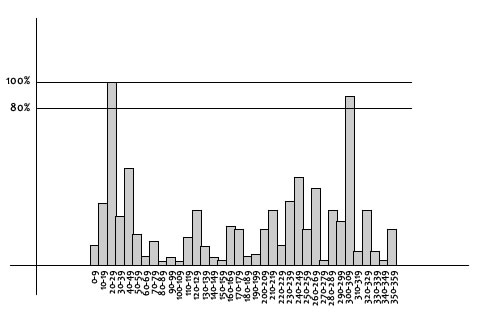 When it is done for all the pixels around the keypoint, the histogram will have a peak at some point. And any peaks above 80% of the highest peak are converted into a new keypoint. This new keypoint has the same location and scale as the original. But it’s orientation is equal to the other peak.

Once a keypoint orientation has been selected, the feature descriptor is computed as a set of orientation histograms.

Histograms contain 8 bins each, and each descriptor contains an array of 4 histograms around the keypoint. This leads to a SIFT feature vector with 4 × 4 × 8 = 128 elements.

In this section we will be performing object detection using SIFT with the help of opencv library in python.

Here I took pictures of Taj Mahal from different viewpoints for train and query image. 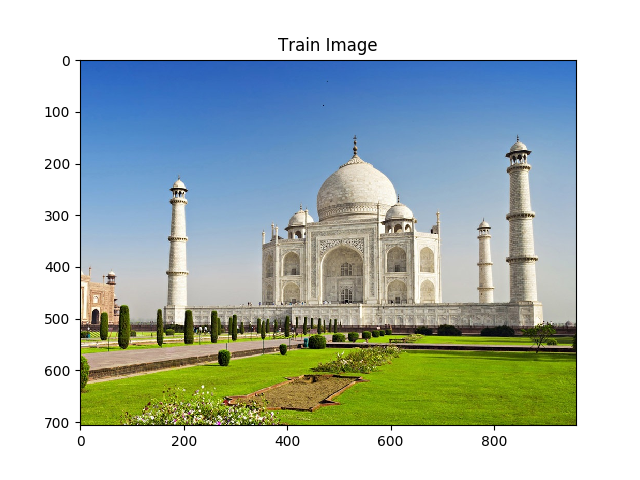 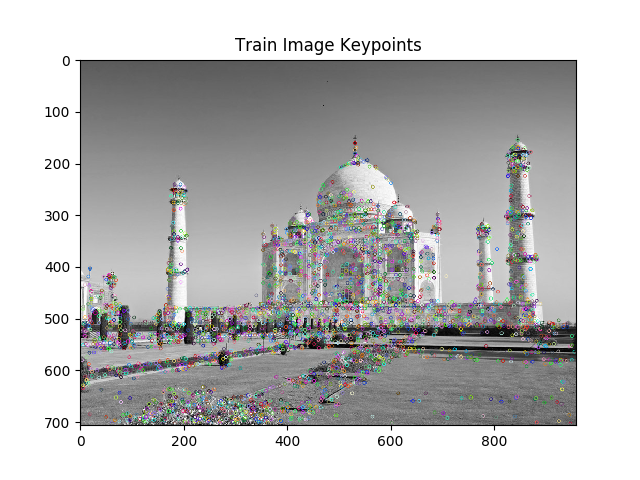 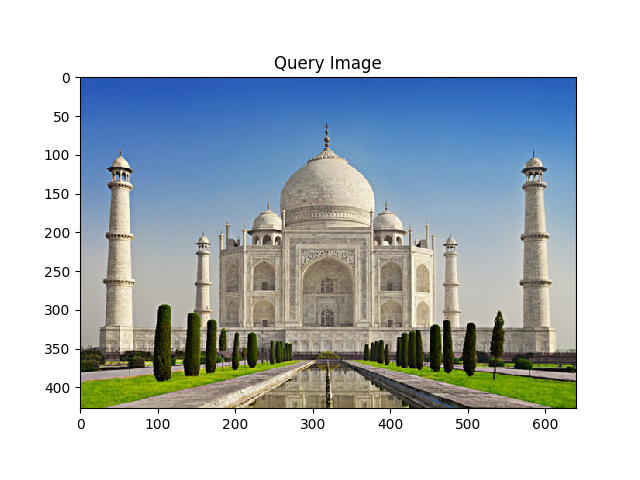 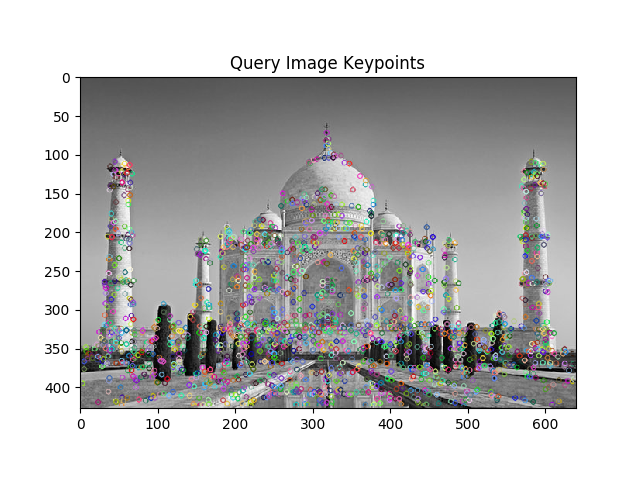 As you can see from the above code that the following function :

is the one that does the computations for the SIFT algorithm and returns keypoints and descriptors of the image.

We can use the keypoints and descriptors for feature matching between two objects and finally find object in the query image.

Now we move onto feature matching part. We will match features in one image with others.

For feature matching we are using Brute-Force matcher provided by OpenCV. You can also use FLANN Matcher in OpenCV as I will use in further section of the tutorial.

Brute-Force matcher takes the descriptor of one feature in first set and is matched with all other features in second set using some distance calculation. And the closest one is returned.

The visualization of how the SIFT features match up each other across the two images is as follow: 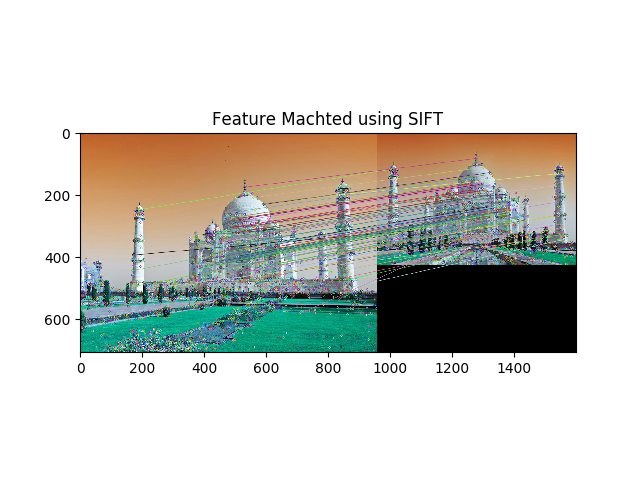 So till now we have found the keypoints and descriptors for the train and query images and then matched top keypoints and visualized it. But this is still not sufficient to find the object.

So now we will use a train image and then try to detect it in the real-time. 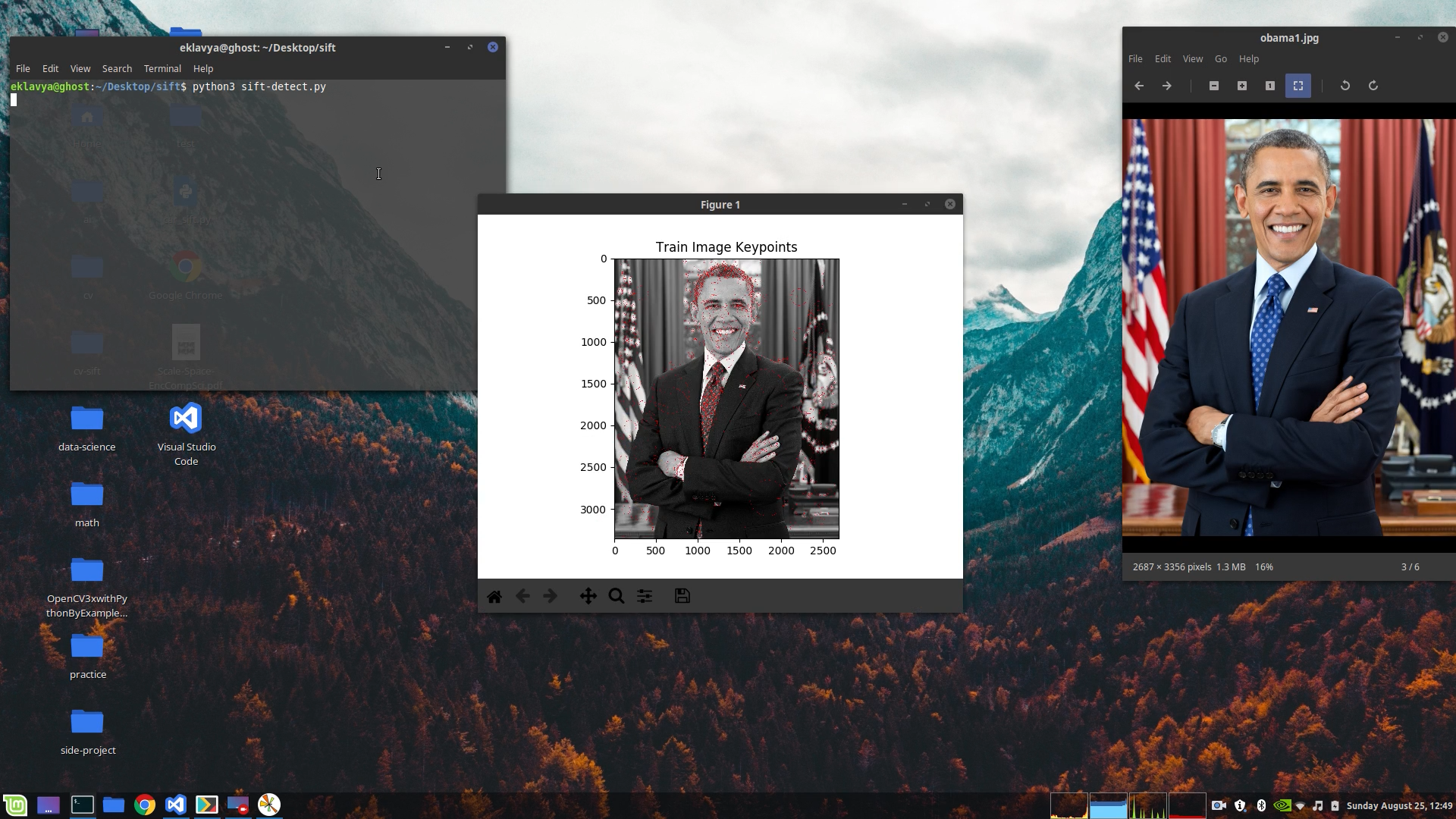 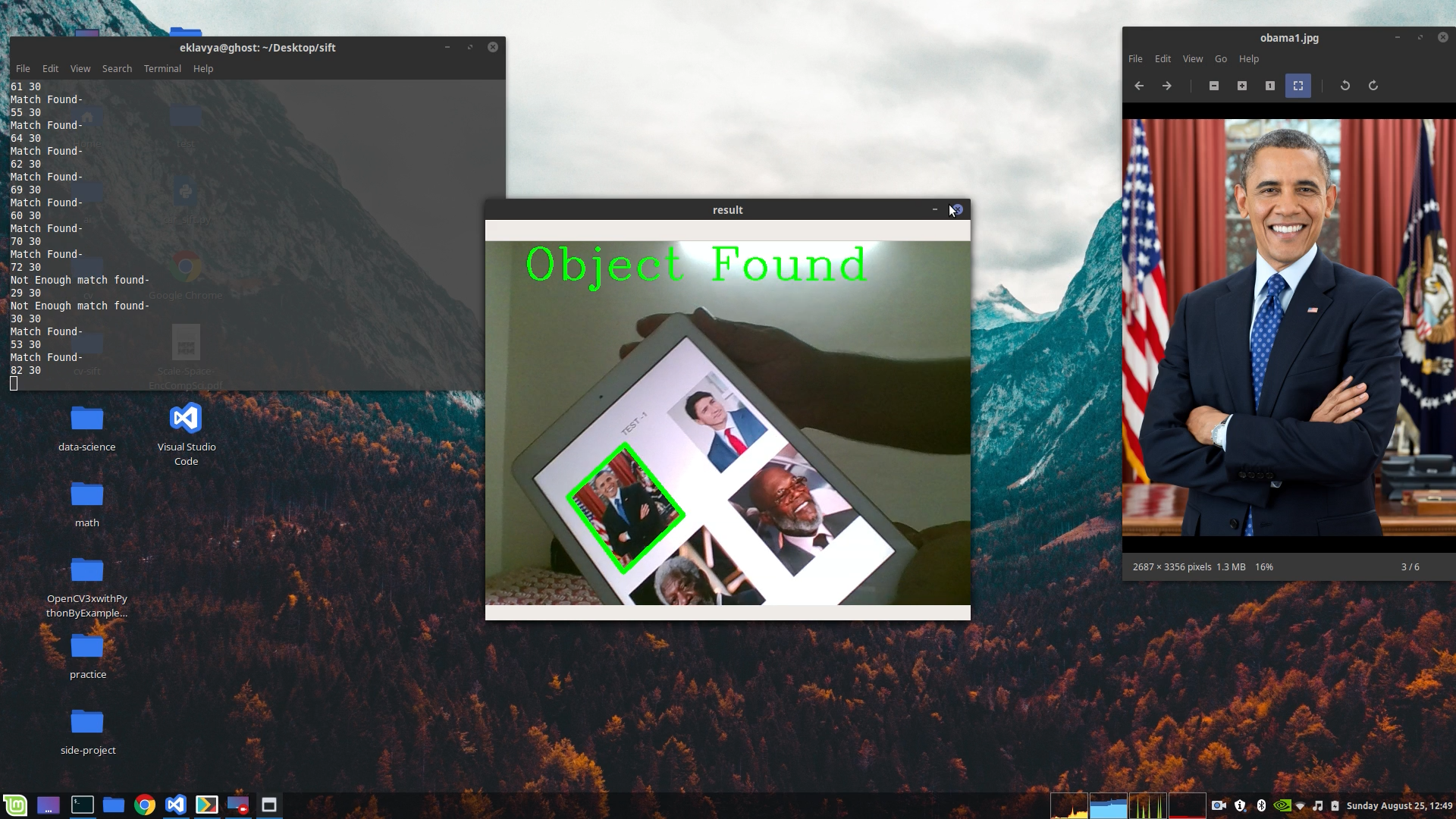